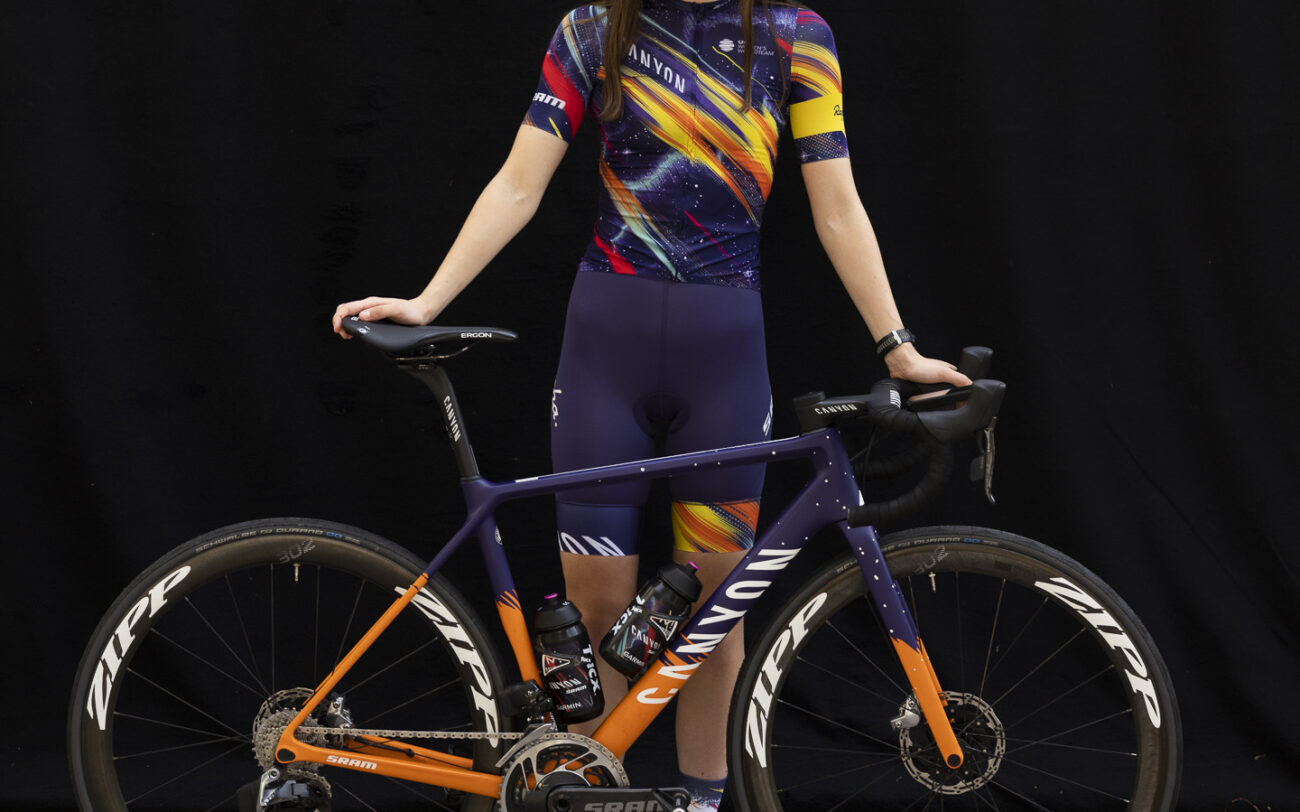 CANYON//SRAM Racing together with Zwift, the online global fitness platform born from gaming, have announced Maud Oudeman as the winner of the women’s 2021 Zwift Academy Road program, following a week-long final held in Mallorca. Oudeman will join the Women’s World Tour team from 1 January, 2022.

Zwift Academy Road saw a record of over 150,000 riders take part in 2021, with many benefiting from the structured workouts and seeing improvements across the 8-week program. It was the sixth time the global online talent ID-program was offering the opportunity to turn professional at CANYON//SRAM Racing and follow in the footsteps of the likes of Ella Harris and Neve Bradbury.

For the first time, the men’s and women’s finals were combined and held together in Mallorca, Spain. The five men and five women contenders faced daily challenges, both on Zwift and on the famous Mallorcan climbs.

Winner of the women’s Zwift Academy, Maud excelled at every task thrown at her over the week, winning multiple ‘rider of the day’ accolades and proving a popular fit with her new teammates at CANYON//SRAM Racing.

Kasia Niewiadoma says, “I have to say that all of the Zwift Academy finalists were at a very high level. All of the women displayed characteristics and talent that showed they were ready to be a part of the team. It proves how serious riders are now taking this opportunity offered by Zwift and the team to turn pro.”

“What I liked about Maud was that she could really be herself throughout the week. She was very strong during all the workouts and challenges but she had a nice attitude on and off the bike, and when she was in just riding mode compared to racing mode. I’m confident she will easily bond with all of her new teammates next year. My tip for Maud would be to stay who she is. She’s doing great so far! The year will be full of surprises and challenges but I feel like she is ready for that.”

Oudeman, from Nijmegen in The Netherlands, was overwhelmed when the announcement was made.

“I can’t believe it!” says Maud. “On hearing my name as the winner, I felt so many different emotions. Mostly, I felt proud of myself for what I have achieved. I felt proud that I started this journey, enrolling in Zwift Academy and thinking about a dream to make it to the finals. Proud of a bag full of experiences from the finals that I took home with me to The Netherlands. The week was so amazing but also a tough test.”

“It feels unreal to be the winner of the Zwift Academy. It really is a dream coming true. I cannot wait to race for CANYON//SRAM Racing and I’m really excited to continue to learn, improve and help the team as much as I can next year.”

Neve Bradbury, the winner of last year’s women’s Zwift Academy finals that were held virtually, was on hand in Mallorca to watch the finalists battle it out.

“I feel like I didn’t have to deal with the same amount of tension as the finalists did this year, but I could still empathise with what they were going through. It’s such a big opportunity,” says Neve.

“Maud’s mental and physical strength impressed me, especially her race mentality on the bike. Going into 2022, I would give Maud the tip to just do her best and remind herself that sometimes it will be hard, but that’s the sport and she’ll come back stronger each time. The team is here to support her.”

CANYON//SRAM Racing Performance Manager, Lars Teutenberg: “Maud’s determination was impressive. The way she fights the hardest when it’s toward the finish line, and then being able to deliver a final kick at the end of each challenge. For a young rider, Maud was very consistent over the week. She never had a bad day with all of the challenges the finalists had to face. I believe Maud will have the opportunity in plenty of races next year to show her strengths and we’re looking forward to seeing what we can achieve together.”

CANYON//SRAM Racing Team Manager, Ronny Lauke: “The Zwift Academy continues to identify raw talent that has the ability to become top-level cyclists in the sport. The recent winners have all shown this with their impact on road cycling and results. In 2021, it was great that the Zwift Academy Finals were able to be held as a camp again. The level of competitiveness among the riders was very strong. Maud stood out with her consistent results and powerful performances throughout the week. We look forward to welcoming her as a member of the team.”

In the men’s Zwift Academy, Alex Bogna from Australia won the pro contract and will race with Alpecin-Fenix in 2022.

All of the action from the Zwift Academy Road finals was captured in a 5-episode series hosted by GCN  that can be watched here.