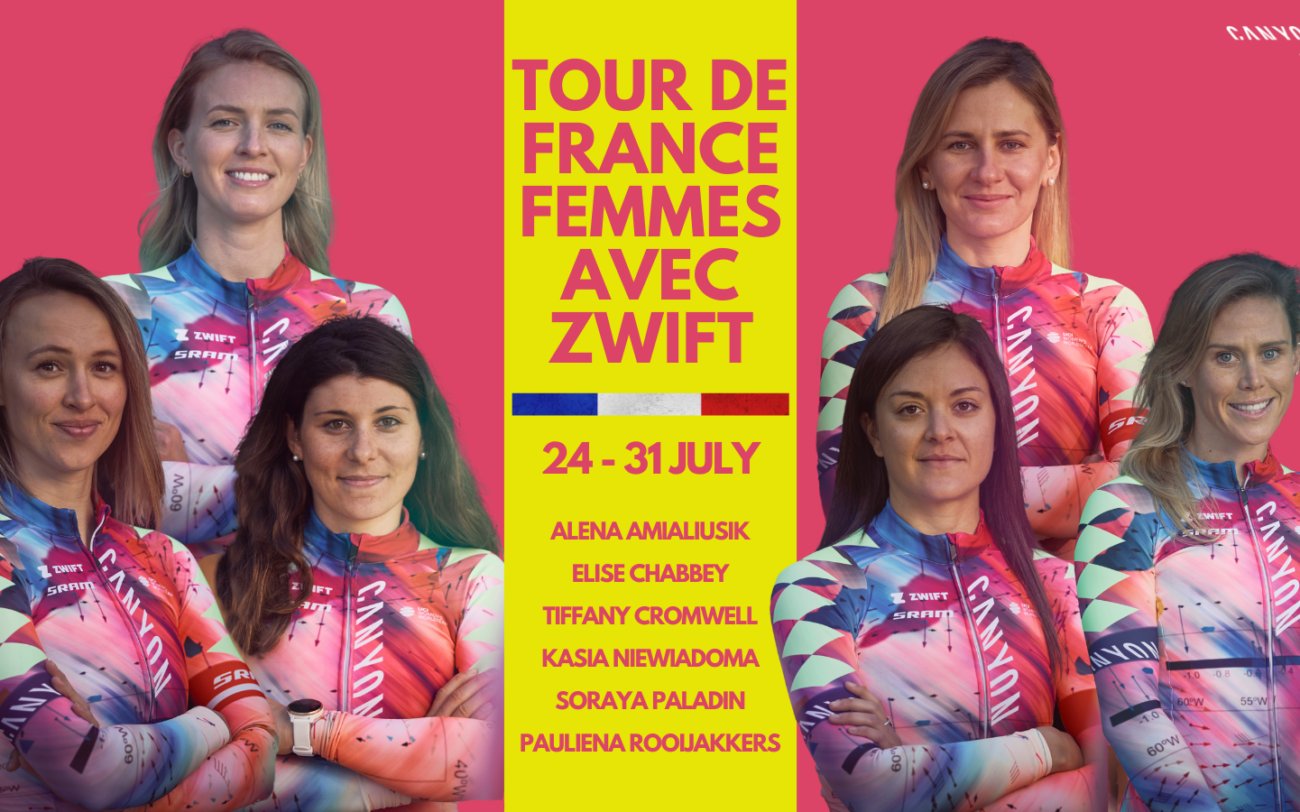 We proudly confirm our roster for the Tour de France Femmes avec Zwift. CANYON//SRAM Racing will compete with a dynamic and experienced group with leading duo Kasia Niewiadoma and Pauliena Rooijakkers, alongside the commanding experience of Tiffany Cromwell and Alena Amialiusik and boosted by formidable all-rounders Elise Chabbey and Soraya Paladin. The eight-day stage race starts in Paris on Sunday, 24 July and will conclude with a spectacular summit finish on La Super Planche des Belles Filles on Sunday, 31 July.

“The Tour de France is the biggest bike race and brand with the most expansive reach in the sport. Having now our Tour de France Femmes avec Zwift, we will benefit from that prestigious name. Globally, many more people will be made aware that women compete in bike races at the highest level. This is a milestone. The entire sport will benefit, and those running and investing in the sport for years already will be rewarded with increased attention.”

“For us, the Tour de France Femmes avec Zwift has been a big goal since its initial announcement. We believe we have selected a strong and experienced team for the tour. A versatile lineup that can handle the additional demands of a race of this calibre. We aim for stages through strength in depth performances and for a top five in the GC. Our selected riders have prepared well through different pathways. We are convinced the entire team is well prepared, so we can confidently take on the eight stages,” states Ronny.

One of the most experienced riders for the team, Tiffany, confirms her preparations for the eight-day stage race have gone well.

“I’ve had a long block of training since Women’s Tour. I also did some course recon during this period, so I know what’s in store for the hardest stages. In the last two weeks, things have started to click. My form is strong, and I feel good on the bike and ready to go,” says Tiffany.

“My goal overall is to have a strong tour. My main role will be team support and road captain. We have an incredibly strong team for the race, especially for the demanding and climb-heavy stages. I know the last two stages aren’t suited to me, but everything up until then, I believe I can go deep into the final of the stages. I aim to be there for my teammates to help set us up for stage victories or the overall. Of course, if there are opportunities along the way on the non-GC days, I’ll be willing to put my hand up if it fits with the team plan.”

Pauliena Rooijakkers says her ambitions are clear, “I aim for the general classification. The climbs at the final weekend are very nice, and I will give everything in those days to fight. I need to be sharp and prepared for anything that can happen in the days before the mountain stages, but I’m feeling very good.”

Fellow leader Kasia Niewiadoma targets stage wins on her way to the GC classification. “My goal is to win. To win a stage and win a podium spot. I’m very pleased with my preparations. Everything went very well, and I feel ready to line up in Paris and get things going,” said Kasia.

The Tour de France Femmes avec Zwift can be followed on Twitter with #TDFF and broadcast daily to more than 190 countries.