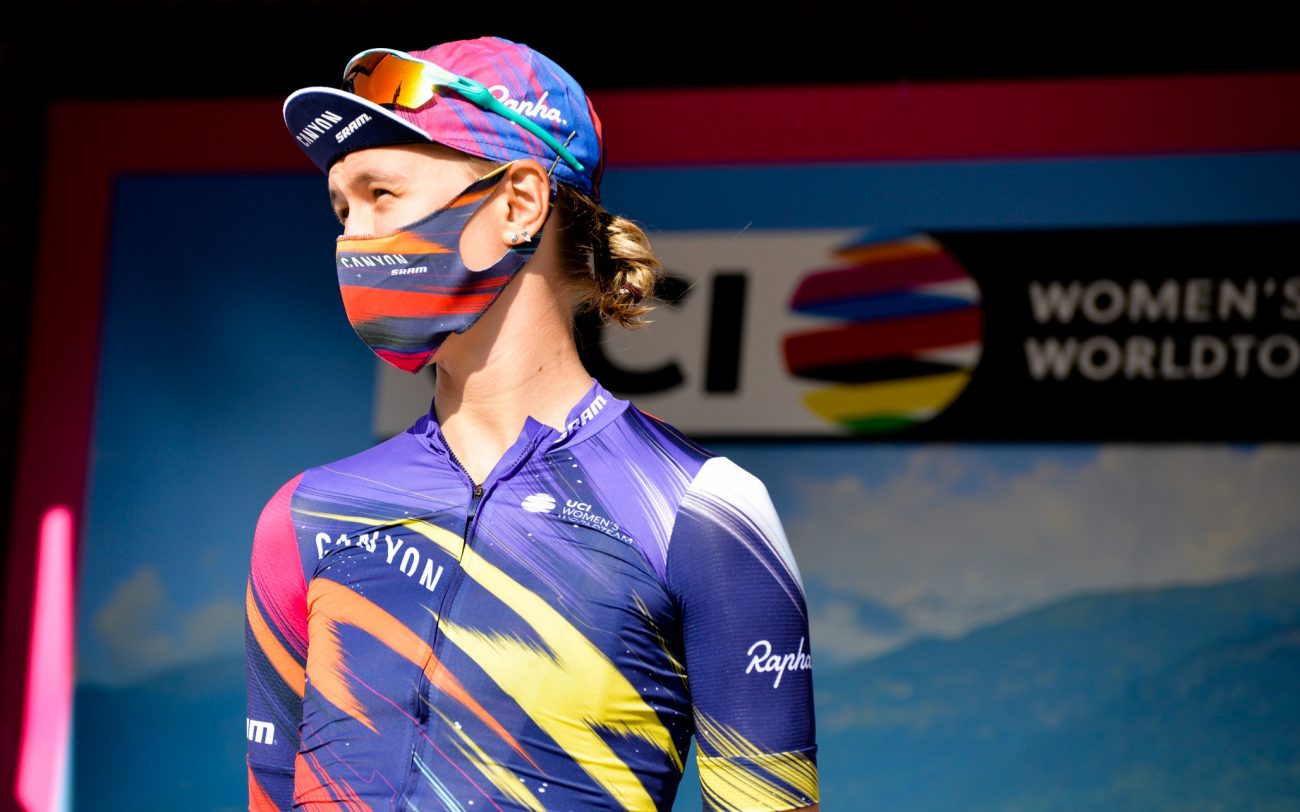 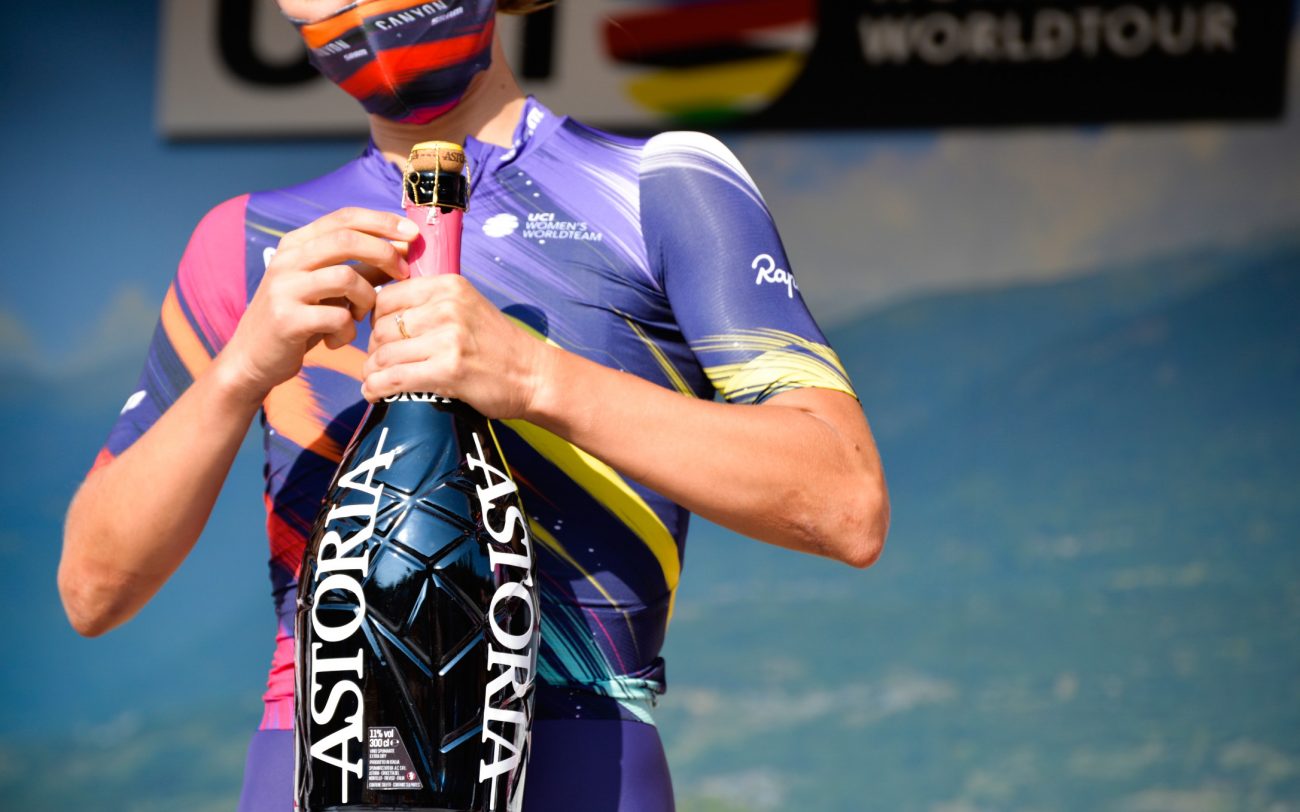 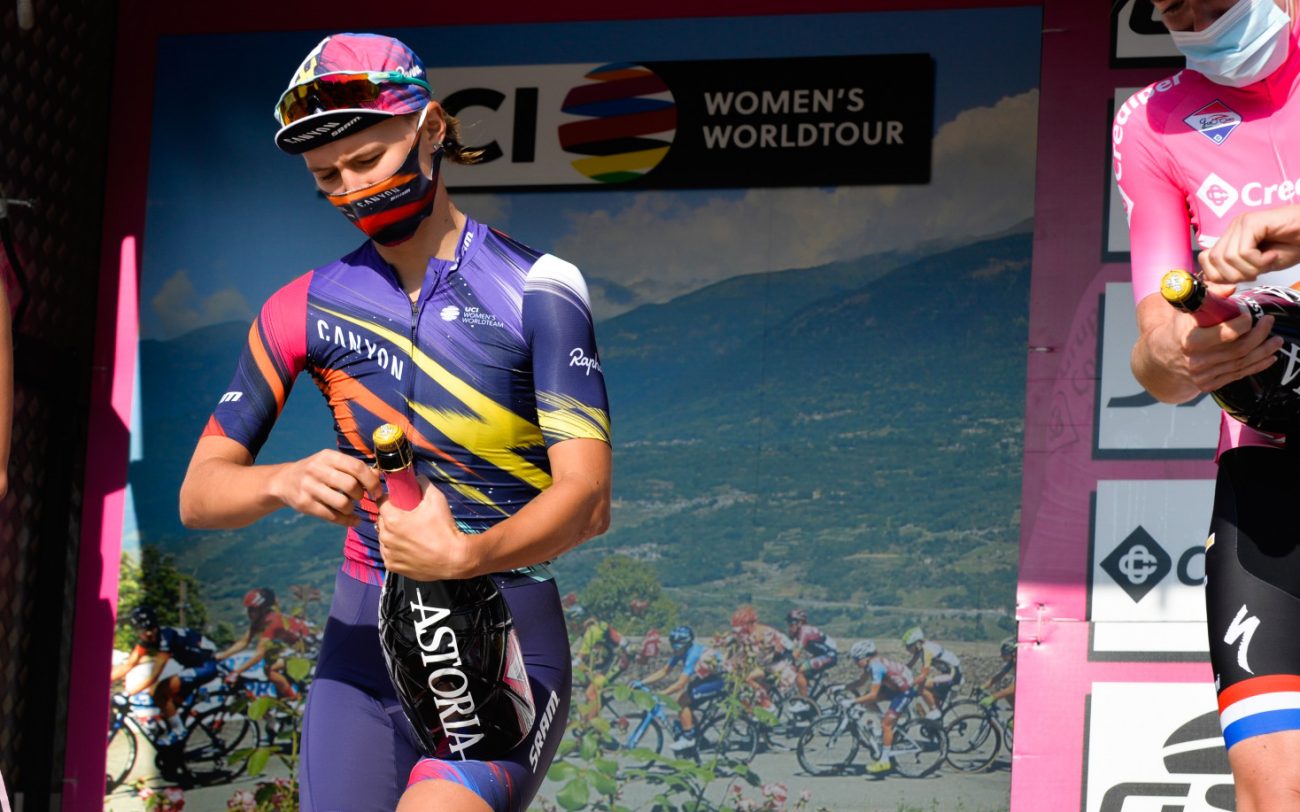 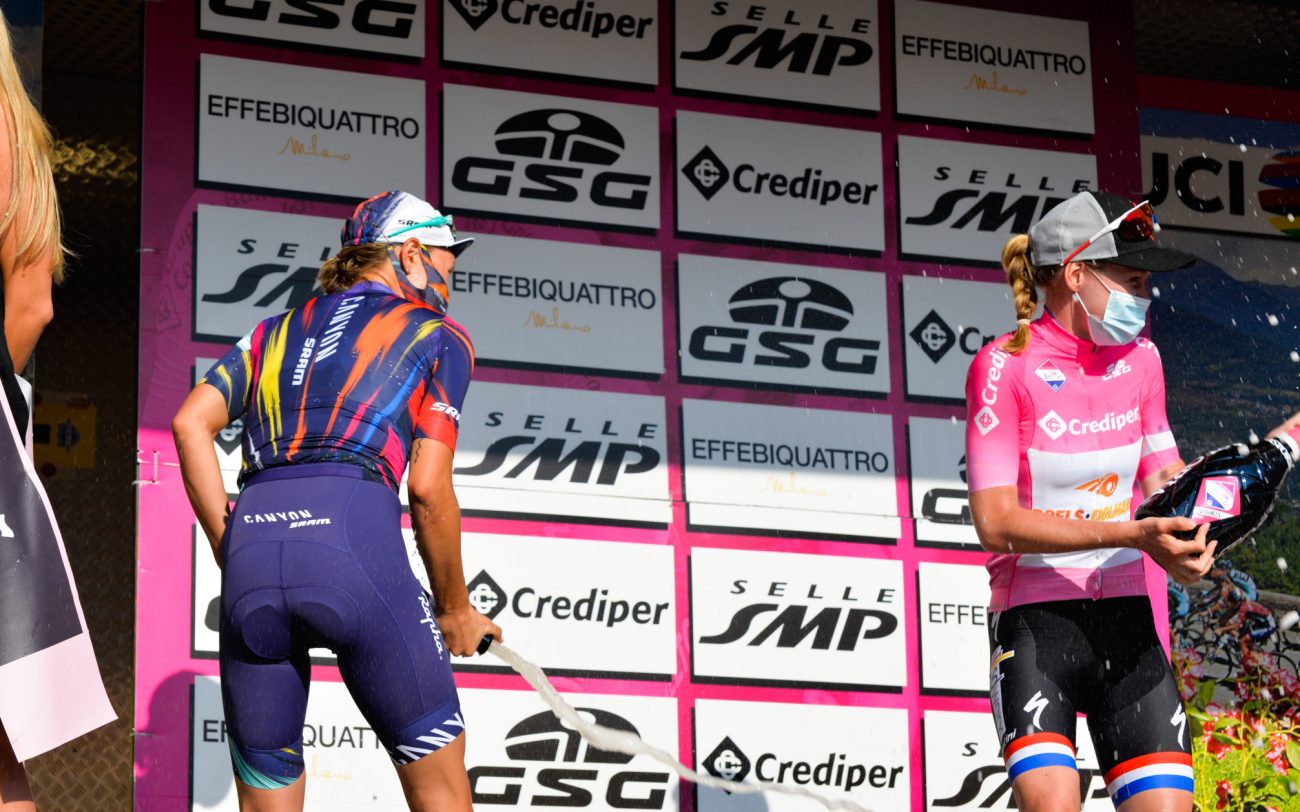 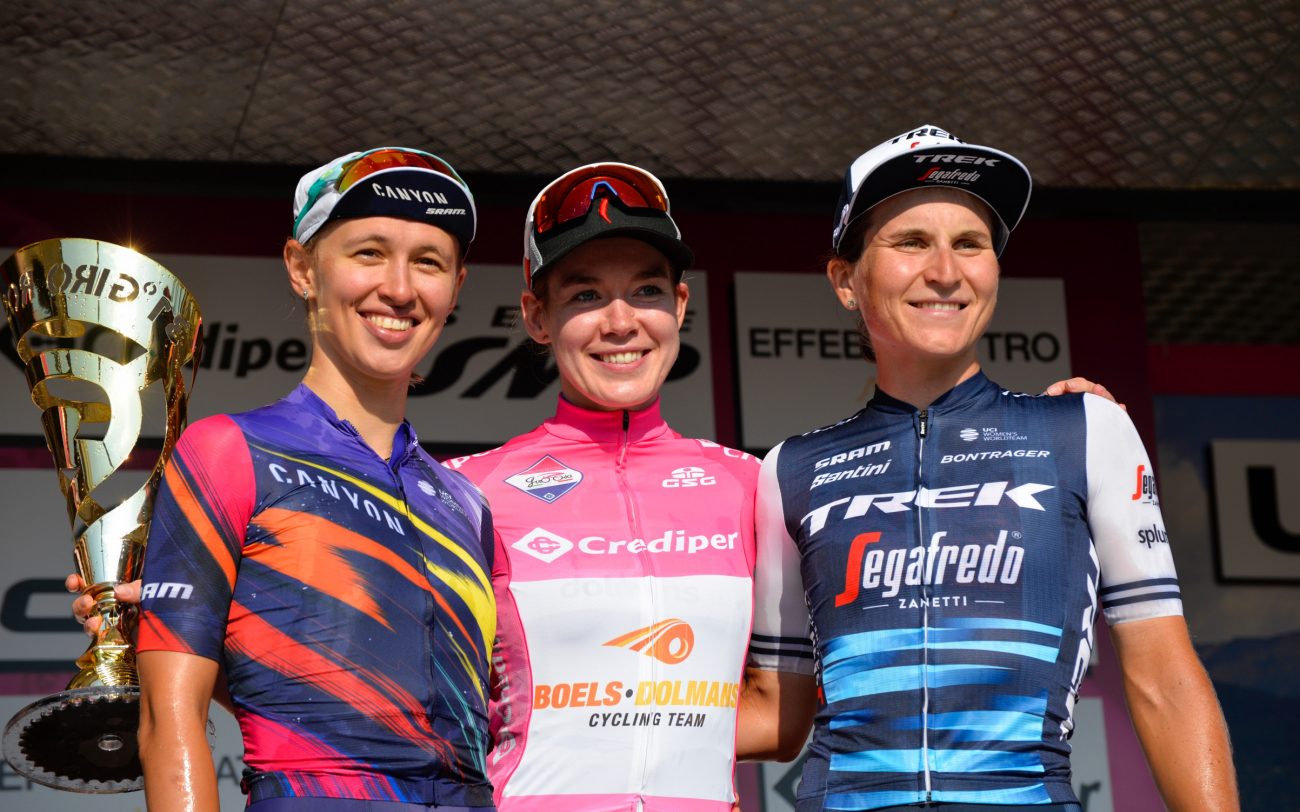 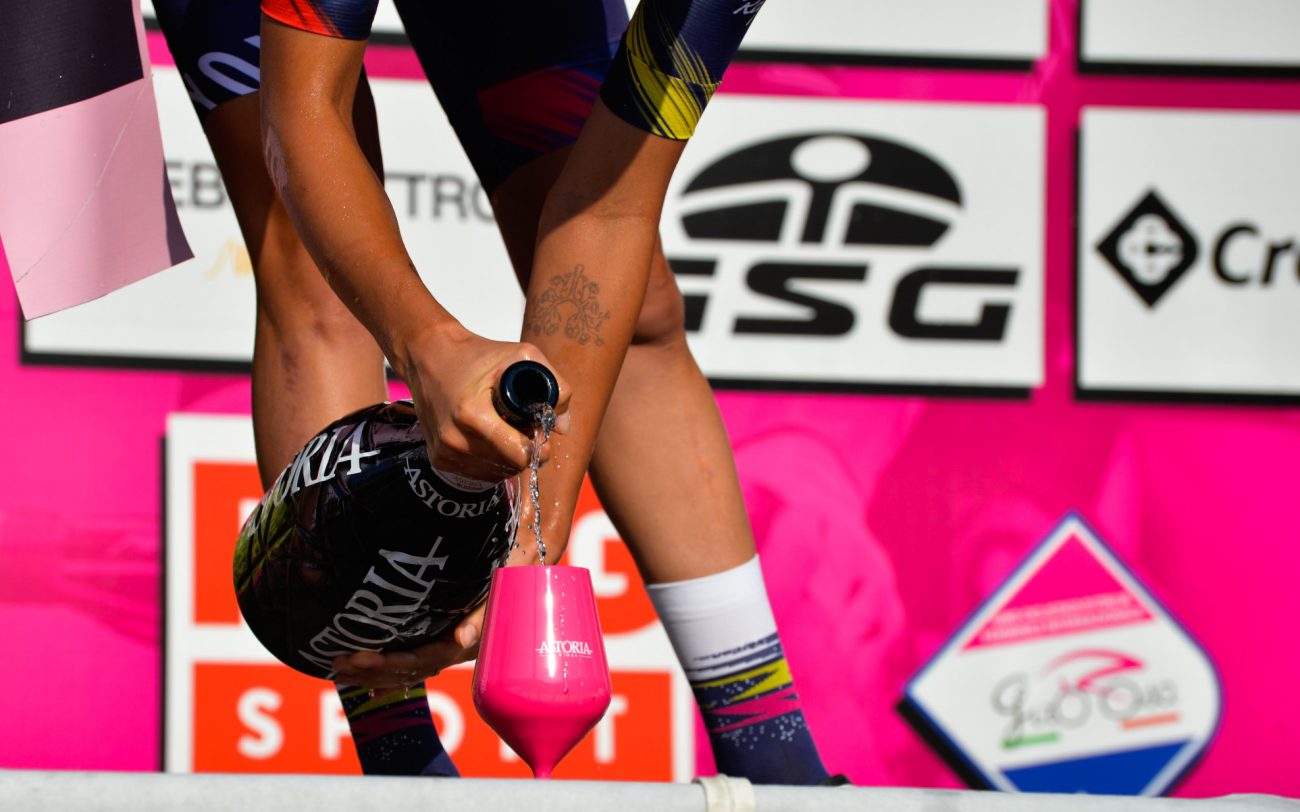 Kasia 2nd at the Giro Rosa!

Kasia Niewiadoma had her career-best Giro Rosa when she finished second on the general classification today in Motta Montecorvino, Italy. It also marked our team’s first time on the podium in the nine-day stage race for the maglia rosa. The general classification (GC) was won by Anna van der Breggen (DLT) with Elisa Longo Borghini (TFS) behind Niewiadoma in third place.

“I’m super happy. I didn’t expect that result coming into the Giro Rosa,” said Kasia before the final podium.

“It wasn’t my goal to go for the GC so it gives me even more satisfaction to achieve this. In previous years I’ve thought about the GC but then I’ve usually ended up disappointed, so I came in this year just wanting to race and do my best.”

“With every passing day I was gaining more confidence and started to believe that the fight for GC really was possible. Being second behind van der Breggen is a success.”

Kasia continued, “I enjoy working with our Sport Director Rolf (Aldag) because he makes me feel calm and confident. Usually he is always in a good mood so that balances sometimes our nervous pre-start atmosphere!”

“I’m so proud of my teammates because they did an amazing job, starting with the TTT and until the very last pedal stroke today. We were fully committed and stayed concentrated on our goal as the race went on. I think everyone is going home now with tired legs but a smile on her face.”

Read what each of Kasia’s teammates have to say about their Giro Rosa below.

Elena Cecchini: “Personally it was good to be racing the first and only Women’s World Tour stage race of this year. I had ups and downs but I am happy that on the bike I could be quite consistent every day and contribute to our team plan.”

“One of the standout moments was yesterday, when Kasia was riding with the maglia rosa. I was not riding last year when the team had the leader’s jersey for five stages due to my broken wrist, so this was a little revenge for me. It was a pleasure and an honour to ride for the maglia rosa. I also realised that I raced really well, especially in the echelons to protect Kasia.”

“I am very happy with the result overall. I think Kasia can be proud of us, and herself that she brought a true team effort to the podium.”

Alena Amialiusik: “I was very happy with my race. We worked well together and we achieved a good goal of getting Kasia on the podium. We went to the Giro Rosa and we knew that we wanted to aim high. It’s our first Giro Rosa GC podium for CANYON//SRAM and we can be proud of the result.”

“One thing that stood out for me, that was after every stage we finished it and said that we had had great teamwork. That consistency was really nice to see and that’s what you need to achieve the GC at a race like the Giro Rosa. I also enjoyed having Rolf Aldag as our Sport Director. It was our first stage race with him and his points and tactics gave us a lot of confidence and trust.”

Hannah Barnes: “The tour was good for me. I felt like I rode into the race and I was able to still be there for the team in the final stages.”

“Stage six was very special for me. I was given the opportunity to have a go in the final and was really happy to have achieved a podium result for the team. But to be honest, I loved every stage. We rode so well as a team and were all committed to one goal and that showed.”

“Kasia rode like a champion! She thoroughly deserves her second place and we can all be proud of how we rode to help her get there. It was a big step in the right direction for the team and we can all look forward to the next month of racing.”

Omer Shapira: “Personally I’m disappointed with my own race. I had hoped, and expected, to be in a different place in terms of being a teammate. I still have a lot to learn and to improve on. If I’m honest, I lost my confidence from day to day, and struggled to do my role in the team.”

“Every day at the Giro Rosa was special. Although my morale was low, I took it as an opportunity to learn and to improve myself as a cyclist in the future. That said, I’m very happy for the second place for Kasia. She, and my teammates did amazing. and they can be very proud of this GC podium.”

Lisa Klein: “I’m really happy with the GC result of Kasia and how we raced together as a team. She was brave and was fighting really hard every day and it’s a great result for the team.”

“After the second stage, I was thinking that I wouldn’t finish this Giro Rosa, I didn’t know how to handle it and with so much more climbing coming ahead. But then I went day by day and I got through it, and I did my best to help in various moments, It was a good experience to race my second Giro Rosa and I think I can make a step forward after this.”

“My favourite stage was this long stage from Assisi to Tivoli, because I could be there until the end for the lead out. I also really enjoyed Hannah’s second place on stage six. It was outstanding and it’s nice to see her up there and getting a small reward for her hard work for the team. I hope it gives her confidence towards her next goals.”

“Again, I’m really happy with Kasia’s result, the teamwork we showed, and of course our staff and Rolf are also a part of this second place on the GC.”