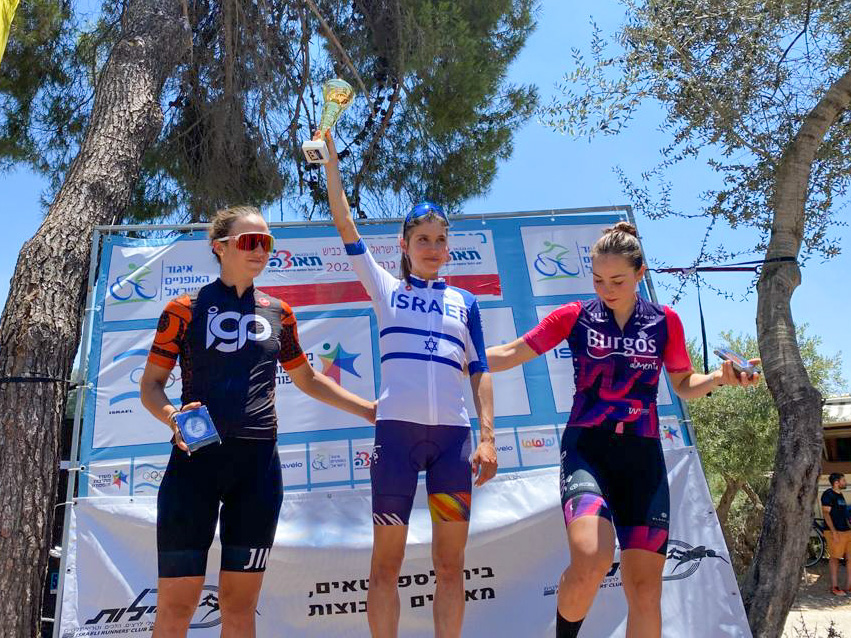 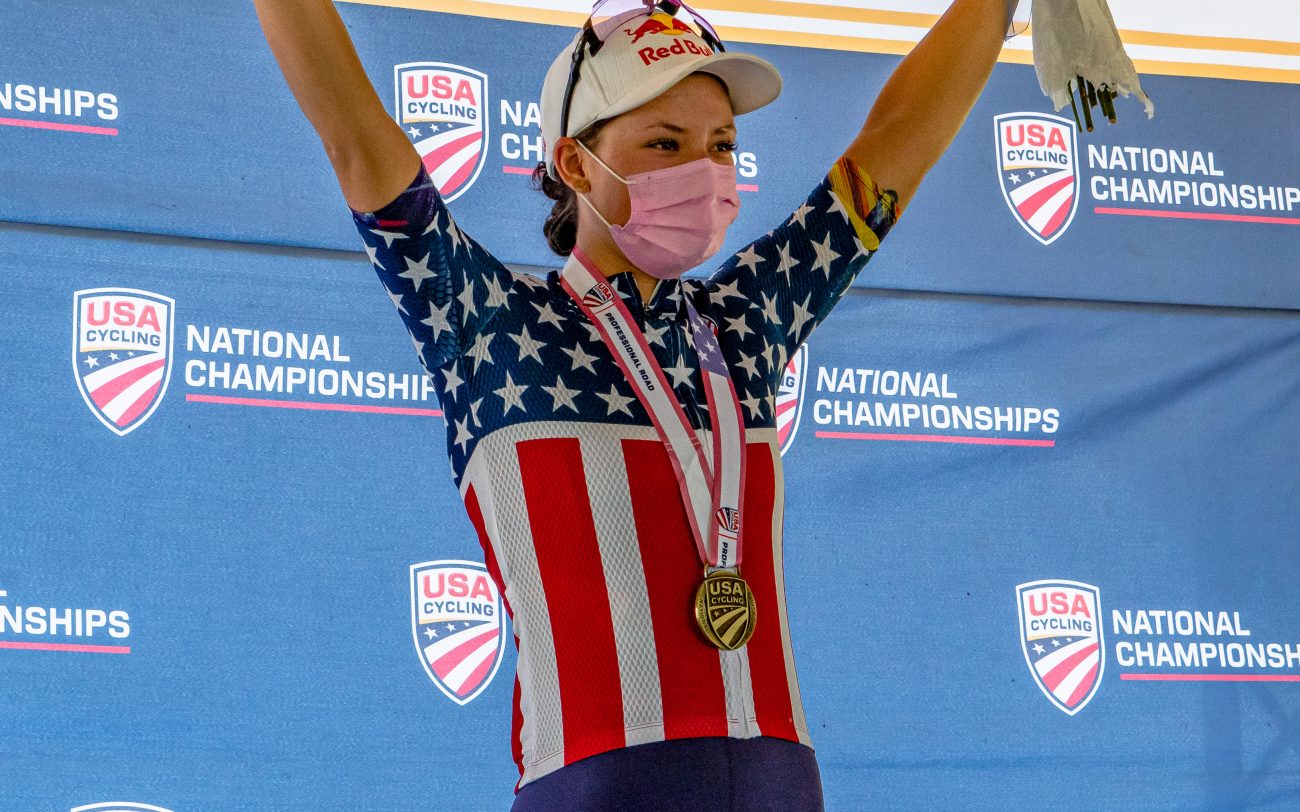 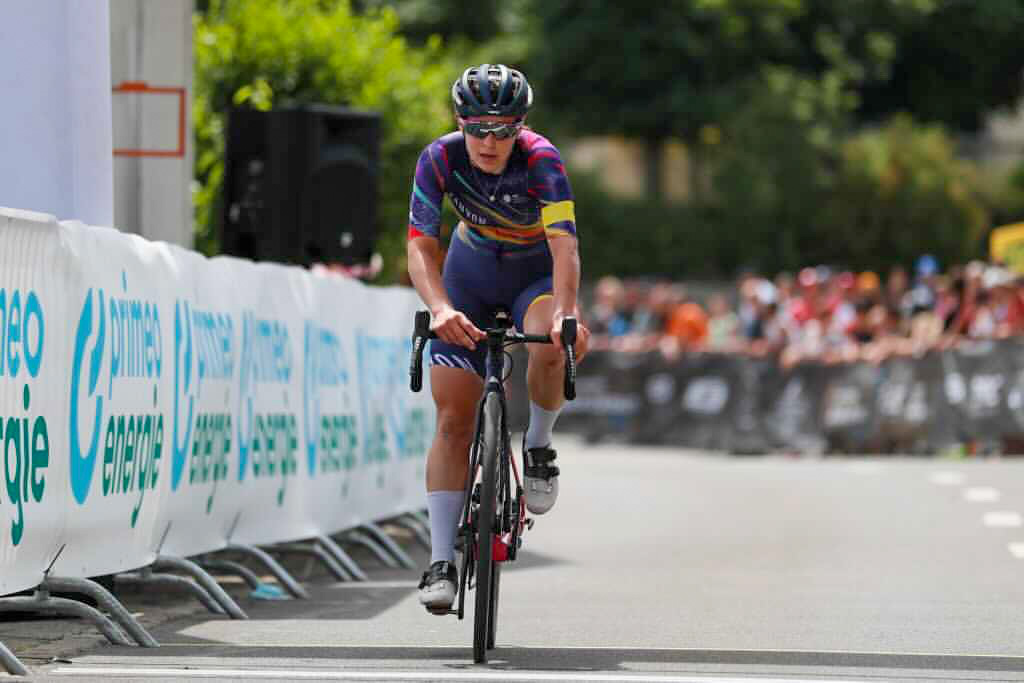 2 NATIONAL TITLES AND OMER BREAKS HER OWN RECORD

Omer described her race, “The course was the same as in 2020 with a 24.5km lap with rolling hills. It doesn’t really suit me as the climbs are only one to four minutes long each. My competitors raced conservatively and sat on my wheel. Last year I took that type of riding quite personal and it bothered me. This year, I took it as a compliment and approached the race differently.”

“I pushed on the hills and rode tempo on the flats. Lap by lap I made the others tired. On the last hill I attacked and only Rotem (Gafinovitz) could follow. I waited a moment and attacked again, and rode to the finish alone.”

Omer continued, “I’m happy because I proved that I’m the strongest here even if I rode the front all day. Mentally I raced well and I’m proud of myself. I feel really good after training at altitude and I’m looking forward to the next team race, La Course by Le Tour de France.”

Omer did not contest the Israeli individual time trial (ITT).

266 days after crashing at the 2020 UCI Road World Championships, Chloé Dygert returned to racing in the women’s ITT at the USA Cycling professional road national championships.

An extensive rehabilitation program for a serious left thigh laceration followed Chloé’s crash on 24 September 2020. A medical team composed of experts from Red Bull, CANYON//SRAM Racing, USA Cycling and USOPC developed a plan with Chloé and her coaching staff in order to return to competition and get Chloé ready for her ultimate goals at the Tokyo Olympics.

Chloé’s win on Thursday was her first elite women’s national ITT title. After the race Chloé said, “It’s a great step forward to win in my new CANYON//SRAM team colors. My coaches, my team and I will now go right back to work and focus on preparations towards Tokyo and the road season ahead.  I’m so honored to have raced here in Knoxville and so proud to wear this national championship jersey.”

Teammate Alexis Ryan didn’t race the ITT but finished fourth in the criterium on Friday night, and ninth in today’s road race.

“I felt pretty good the entire race. The tactics were quite strange coming from a lot of the teams. It was difficult being alone and I lost some energy following attacks,” said Alexis.

“The climb on the lap is the only decisive place on the course so it was raced hard each time. The break up the road created a rubber band effect behind it where the gap continued to go out and then come back.”

“The final time up the climb, Coryn Rivera (DSM) lit it up and I cramped and couldn’t follow. I went my own pace and then I tried to chase back with Leah Thomas (MOV) but we never made it. It’s disappointing but that’s the result and I’ve got to roll with it,” remarked Alexis.

In the German national championships, Lisa Klein and Hannah Ludwig won silver and bronze medals in the ITT yesterday.

Coming from a team altitude training camp, Lisa said she was happy with her performance. “I saw the course Thursday evening and I was quite impressed with how tough it was and knew it would be hard to find a rhythm. On race day I had great legs. I could feel it already in the warm up!”

“I had Lars (Teutenberg) on the radio and it helped. I felt so good on this new Canyon CFR TT Disc bike. The race was super painful but just so much fun! I’m really happy with my performance. My numbers were the best for the season. Considering my recent training has been without any intensity, I had a good day and am happy with my silver medal.”

The bronze medal for 21-year-old Hannah, was her first medal at the women’s elite level.

Hannah said, “The course was super hard especially with the heat. My plan was to invest more into the wind and then try to hold it on the downhill and it basically went to plan. I didn’t have the best spring so I am very happy about being third behind two superstars!”

Hannah continued her strong form with a fifth place in the women’s road race today. A seven-rider breakaway formed on lap ten of fourteen, and quickly established a healthy lead. A duo skipped away from the group on the last climb, and Ludwig found herself sprinting for the final podium spot.

“In the sprint for third place I was too nervous and messed it up. I’m just not experienced in that situation. Overall, I’m very happy with my form after this weekend.”

Lisa won the bunch sprint for eighth place. “I didn’t have the legs for such a hard course of constant up and down. I knew coming from altitude that I was missing intensity. After Hannah’s group went, I was pleased with how I paced the climbs and went for the sprint at the end. I’m happy with my performance this weekend and now go straight to a track training camp with my national team.”

After choosing not to race the individual time trial on Wednesday, Elise Chabbey took a silver medal today in the women’s Swiss national road race.

Elise said after the race, “Nationals are always special. This year more so, because everyone knows that I’m in good form and they were looking at me. My tactic was to split the bunch early and then go for a sprint as the finish suited me quite well.”

“I tried several times to attack and get away but each time it eventually came back. On a flat section, when I was at the back of the bunch, Marlen (Reusser) attacked and no one reacted. She was strong and with just me chasing, and bringing everyone else along at the same time, it was going to be hard. I attacked my group on the final climb and could at least take the silver medal.”

“I’m really disappointed. I was not patient enough and I tried to go too early. If I raced defensive and sat on the wheel of Marlen all day and then attacked her on the last climb, maybe I could have won. But it’s not my nature to race like that. So, I’ll come back and aim to regain the jersey in 2022,” smiled Elise.